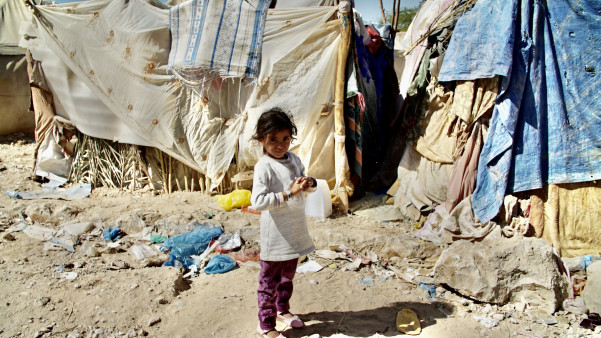 Since 2015 an increasingly brutal conflict has created the world’s largest humanitarian crisis. It has left 24 million people in need of humanitarian assistance – a figure that includes 12 million children, 2.3 million of which are under 5's suffering from acute malnutrition.

£120 will provide 2 families with a nutritious food pack that will feed them for up to a month, or one family for up to 2 months

The combination of environmental disaster, ongoing conflict, and economic collapse in Yemen, has seen thousands die, 4 million displaced, half of all medical facilities damaged or unable to function, and many healthcare workers unpaid.

Often the medical facilities that are still operating lack basic equipment, such as masks, gloves, and other essentials. And oxygen supplies are virtually non-existent.

These years of poverty and war have left an increasingly impoverished population forced to sell the little they have, to buy the little there is, as the flow of food into the country has been massively disrupted, forcing prices to sky-rocket.

Millions are now only a short step away from famine.

COVID-19 – A Crisis Within A Crisis

A population already weakened by hunger, conflict, and a massive cholera outbreak, are not in a position to cope with the impact of COVID-19. But with your support we can help give them their best chance to fight off diseases. For in supplying hungry people with the clean water and nutritious food packs, we keep their immune systems strong and healthy in the coming, days, weeks, months. And beyond.

The power of fundraising is that it gets your friends, family and work colleagues involved – both supporting you through donations, and spreading the word about the situation in Yemen. And some will even follow your lead and fundraise for themselves.

Another good way of supporting the people of Yemen is to follow our social media platforms, and share our posts about the work we’re doing and the situation in the country. It’s not in the news much at the moment – having been swallowed up by our own coronavirus situation, economic troubles, and Brexit - but your efforts can help it sit front-and-centre once again.