Since 1991 we have been giving support to the people of Iraq. A people who, over 3 decades, have endured conflict, economic sanctions, social strife, and widespread violence. It has created a country whose fragility make it vulnerable to internal tensions and regional unease. 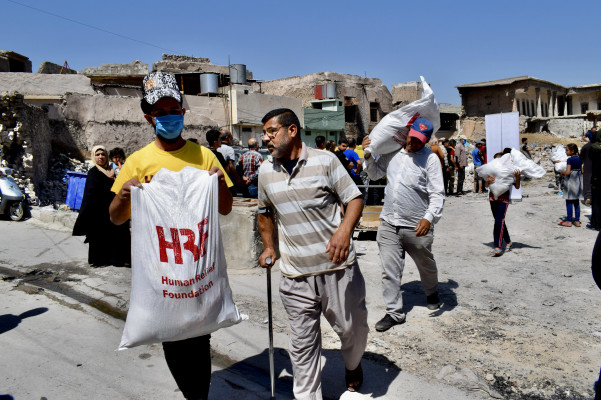 Poverty and financial insecurity are rife, with people often forced to sell whatever they have to meet their immediate needs - such as regularly putting food on the table, and keeping a roof over their heads.

Our food security projects are therefore a key component of our overall strategy in Iraq, providing healthy nutritious food to a hungry population.

Although the conflict with ISIL is over, the impact of this bitter struggle added to the troubles of an already beleaguered Iraqi population. It has left cities like Mosul largely destroyed, a population living in the ruins, and significant numbers of people still internally displaced.

The affects are still being felt today with 5.6 million Iraqis (including 2.6 million children) still in need of assistance, 1.77 million of who have acute humanitarian needs. 1.4 million people are still internally displaced, with 70% of them having been displaced for more than 3 years.

The civil war in Syria has also added to, and compounded, the situation in Iraq, with approx. 250,000 Syrians refugees, of which 154,000 are children, seeking refuge in the country.

COVID-19 - A Crisis Within A Crisis

Coronavirus has added another layer of suffering to a population that has had little respite from trouble over the years. So, although the numbers in need have remained relatively stable, the severity of their needs has increased – leading to a 35% rise in the number in acute need.

The pandemic has also led to large scale livelihood losses. It’s a situation that has impacted most heavily on those many tens of thousands already living in poverty and unstable situations - for these are the people least able to deal with this crisis within a crisis.

However, with your help we will be able to continue supplying critical aid to these vulnerable families and individuals, in the form of food, shelter, hygiene supplies, and essential household items such as blankets and mattresses. We have also been working with key partners to restore houses and accommodation destroyed during the conflict with ISIL.