We are proud of the work we started 27 years ago to help refugees, and through your simple acts of kindness, we have been able to work together to make a difference.

We are proud of the work we started 27 years ago to help refugees, and through your simple acts of kindness, we have been able to work together to make a difference.

There are many thousands of refugees and internally displaced persons (IDPs) around the world, many of whom are facing severe hardship. Due to ongoing civil war and conflict in war-torn countries like Syria, individuals and families alike have had no choice but to leave their homes in search of a safer place to live.

Since 1991 we have been responding to the plight of refugees. One office that initially began in the city of Bradford, expanded its operations and opened branches in several countries across the world to aid those most in need, in partnership with many international development networks.

Our teams have distributed emergency relief in squalid refugee camps across Europe, eased the suffering of Syrian refugee families who have fled their homes in Jordan and nearby countries, worked to ease the burdens of the persecuted Rohingya people close to the borders of Myanmar, and many more people have also been helped.

As the Syrian war escalated over the years, HRF has been continuously responding with emergency relief to those who fled their home country by providing food, medical aid, blankets and other core relief items. To improve the standards of living for refugees, HRF worked in partnership with the World Food Programme (WFP) to distribute food vouchers to over 60,000 refugees. The year of 2018 saw the official opening of the HRF Medical Centre, built in Za’atari which is one of the largest refugee camps in the world, and we have been providing free quality healthcare services constantly to the vulnerable.

The ticket in Mariam's hands means her whole family won't have to worry about food for the next few weeks. 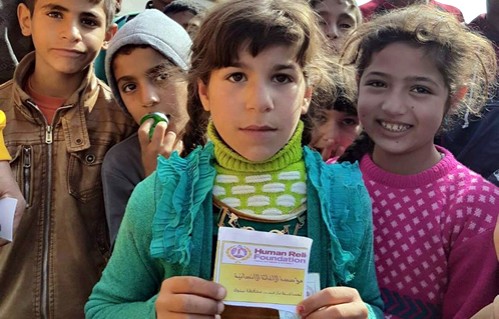 Furthermore, HRF has publicly reported on how our fundraising efforts have made a difference through our Jordan deployment programmes which have seen great success over the years. This week-long programme allowed volunteers to pack and distribute aid, and see for themselves how their donations were being used, and hear the stories of Syrian refugees. 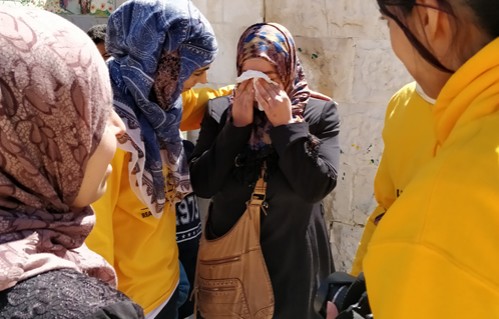 Your generous donations have helped ease the burdens of Rohingya refugees who have fled for their lives into Bangladesh. Living in squalid camps and with nowhere to go, HRF has helped to make their life easier.

The HRF Medical Camp began as a mobile clinic since September 2017 running twice a week, but the team found that the need for a more comprehensive health service was required so a full-time medical clinic was opened to ensure treatment was readily available to those living in the camps. Our teams are also building deep tube wells to provide clean drinking water, and hundreds of children are attending the HRF schools to learn and play. The HRF Kitchen continues to serve over 1,000 hot meals each day.

HRF has been dedicated to serving those most in need since 1991, and continues to reach out to the needy and destitute through your generous help.

With one simple act you can help change a life. Save a life today.

You can donate towards our Syrian Crisis appeal, our Rohingya Emergency Appeal, or find out more by clicking here.

Find out more about Refugee Week by clicking here.